Following the closure of the Point Henry smelting and rolling operations in 2014, the decommissioning and rehabilitation of the site has begun.

Alcoa’s strong commitment to health, safety and protection of the environment underpins every activity associated with the project.

There are three tiers to this project:

The decommissioning process is underway and includes the removal of equipment and infrastructure largely located on the former industrial site.

Alcoa is working with small groups of specialist contractors to undertake the work, with decommissioning expected to be completed by mid 2020.

Alcoa is committed to working collaboratively with the Environment Protection Agency (EPA) Victoria and other stakeholders to achieve mutually beneficial outcomes for the future of the site.

Consistent with the National Environment Protection (Assessment of Site Contamination) Measure 1999 (as amended 2013), Alcoa has commissioned a series of site investigations to identify the potential nature and extent of contamination at the site resulting from historical land use and activities. Suitably qualified consultants have been appointed to support this comprehensive site assessment.

As part of due process for an industrial site, the EPA issued Alcoa with a statutory clean up notice requiring the company to manage environmental contamination at the site in preparation for future use. Alcoa will ensure compliance to the requirements of Clean Up Notice 90009457 issued on 18 December 2018 and amended on 20 August 2019. This replaced Clean Up Notice 90005302, which was revoked by the EPA on 18 December 2018.

Consistent with the previous notice, Alcoa must submit quarterly reports on soil and groundwater assessment activities and confirm if any unacceptable risk to the environment has been identified. To date, there have been no unexpected matters identified by Alcoa or the EPA.

In line with the clean-up notice, an independent environmental auditor is assessing the processes undertaken and provides independent reports to the EPA. Alcoa is also required to provide a written update to the EPA every quarter.

The plan provides a vision that guides the possible future transition of Alcoa’s landholdings over a 20 to 30-year period and unlocks the Point Henry peninsula’s potential for Geelong by: 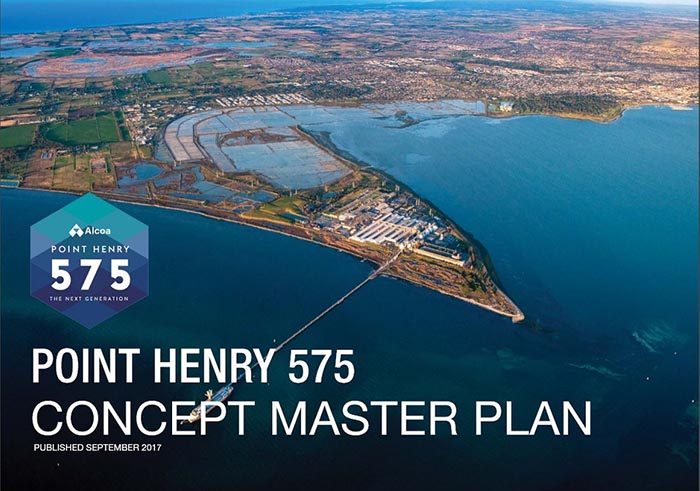 Alcoa is committed to understanding the views and needs of the community of which Point Henry has been a part of since 1963.

Please read more about the project below:

The community is invited to attend one of two drop-in sessions to learn more about the proposed works and speak to representatives from Alcoa and the project team.

Please share your feedback about the landfill consolidation and closure project: