Twenty-four local young people have completed their apprenticeships with Alcoa this year, joining more than 2,000 apprentices, trainees and graduates trained and developed by the resources company during the past 55 years. 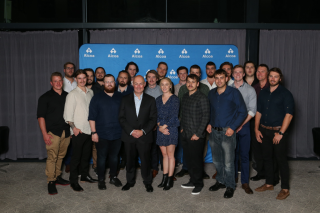 The latest graduates completed their four-year apprentice program run across Alcoa’s mining and refining operations in the Kwinana, Peel and South West regions of Western Australia. There were among 96 Alcoa apprentices working across these sites this year.

Alcoa of Australia Chairman and Managing Director Michael Parker said the company was proud of its history and committed to continuing to train generations of skilled tradespeople.

“These young people are the future of our company, our industry and our communities,” Mr Parker said.  “We expect that our apprentices will stand out in their fields through the care and training they have received at Alcoa.”

“We want everyone to know that tradespeople who are trained at Alcoa are not only highly skilled, but they are safe workers. Workers who are adaptable and who bring a positive attitude which delivers excellence, acts with integrity and cares for their colleagues.”

Family, friends and colleagues were on hand to congratulate the cohort at the annual Alcoa Apprentice Graduation last night (30 Oct) in Mandurah, where the following outstanding awards were presented:

Willowdale Apprentice of the Year Jamie Goodridge spoke on behalf of the graduating bauxite apprentices and said he had become more confident during his trade, not only in his skill set but as a person.

He attributed this to the high quality of training and the focus on safety as well as the lasting friendships he had made by having the opportunity to work across crews and learn from their diverse knowledge.

Bradley Starr, the son of Alcoa employees Lynsey Starr, Safety Consultant at Pinjarra, and Ashley Starr, Process Operator at Wagerup, spoke on behalf of the refining apprentices and thanked Alcoa for an excellent training program that provided a strong foundation for their future careers.

“The stand out memory for me over the last few years is seeing how far I’ve grown,” Bradley said. “I started off as young, pretty green 17 year old straight from high school and now I’ve become a tradesman and I’m watching all the new apprentices start off like I did.”

“It’s a local company with good morals, you are home every night and everyone is here to help you.”

He thanked his parents, workmates, Group Leaders and the tradies he worked alongside for all of their support during his apprenticeship.