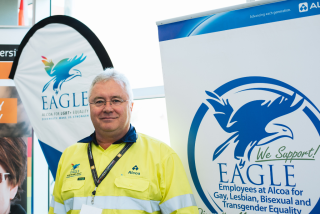 Alcoa Pinjarra Alumina Refinery Manager and lead for Alcoa’s diversity group EAGLE Mark Hodgson, participated as a speaker for the ‘The Role of Allies in Industry Roundtable’ - at the annual Australian Ally Network Conference.The annual conference is the main event for the Australia-wide Ally Network, which supports the inclusion of Lesbian, Gay, Bisexual, Transgender, Intersex and Queer (LGBTIQ) members of our community.

The conference’s nine plenary sessions, 23 breakouts and 90 plus speakers aimed to spark a national and international conversation on how to activate human rights in relation to sexual orientation, gender identity and sex characteristics for all people setting new pathways to policy, innovation and enduring change.

Academics, students and gender equality practitioners were involved and best practice in ally networks in private enterprise and government were showcased, including from Alcoa.

Alcoa was the main, rainbow sponsor of the conference. The company had a display throughout the two days and Mr Hodgson, who is the manager of its Pinjarra Refinery, was among the speakers.

Mr Hodgson said diversity and inclusion were integral to Alcoa’s values and that was why it supported events like this.

“We are a stronger, more competitive company because we make inclusion through diversity a priority,” Mr Hodgson said.

“Our wish is for every employee to bring their ‘whole selves’ to work and to feel included and valued for who they are and for the diversity of ideas and experiences they bring.”

Alcoa was the first resources company to walk in the Pride Parade in 2014 and is a sponsoring the event this year. The company has been named an Australian Workplace Equality Index Bronze Tier Employer by Pride in Diversity for five consecutive years.