Alcoa continues to successfully rehabilitate the area it mines for bauxite in the Peel and South West regions of Western Australia with the company completing another successful planting season that was also a boon for local businesses and local employment. 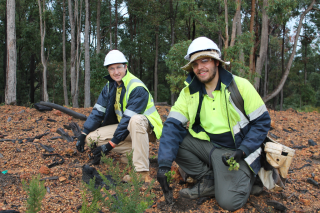 Joshua Page and Aden Griffiths, from Glevan Consulting, complete the last of the Alcoa’s 2018 planting season.

More than 220,000 plants were put in across 412 hectares of previously mined land – the same size as 192 Optus Stadium football fields.

It was the first planting season where Alcoa fully outsourced the plant production required for its annual rehabilitation program with three local businesses in Waroona, Coolup and North Dandalup benefitting.

The outsourcing of plant production to local businesses Hamel Nursery and WA Horticulture and the hand-planting contract with Glevan Consulting provided local employment and injected hundreds of thousands of dollars into the local economy.

Glevan Consulting Managing Director Evan Brown said he had seen the benefits of Alcoa’s commitment to local business for nearly a quarter of a century. For 24 years, Glevan Consulting had provided dieback mapping services to Alcoa and was pleased to now also have the hand-planting contract, which had a further flow on benefits for local economy.

“We have been successful in winning the recalcitrant hand-planting contract for the past three years, which provides an extra 12 jobs for the three-month planting period,” Mr Brown said. “All our employees are locals and we use local businesses for our onboarding process such as procuring (PPE) protective clothing, medical checks, car hire and fuel contracts.”

Alcoa Mine Environmental Manager Soo Carney said it had been a productive planting season for both the company and local community. “Alcoa actively seeks to employ people and work with businesses from the communities near where we operate and this is a great example of our commitment to do that,” Dr Carney said.

Dr Carney said Alcoa mined for bauxite in areas previously logged for timber and not in virgin or old growth forest. She said self-sustaining jarrah forests now thrived in areas where Alcoa once mined bauxite.

Alcoa has rehabilitated more than 19,000 hectares – 10 times the size of Rottnest Island – since its bauxite mining and associated alumina refining operations started in WA in 1963.

“Alcoa is recognised as a world leader in environmental rehabilitation and listed on the United Nations Global 500 Roll of Honour,” Dr Carney said. “Our commitment to constant improvement was endorsed by international biodiversity conservationist Professor Thomas Lovejoy who described our rehabilitation as a model for the mining industry when he toured our bauxite mining operations earlier this year.”

Alcoa’s has been offering free tours of its bauxite mining, world-class rehabilitation and alumina refining operations for 40 years. To book a tour contact tourcentre@alcoa.com or calling 95302400.