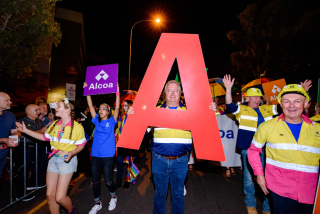 Mark Hodgson leads the march for Alcoa in the 2017 WA Pride Parade. Alcoa has marched for the last four years and was proudly the first resources company to take part in the event.

In accepting the award announced in Sydney today, Mark thanked Pride in Diversity, award hosts, for the much-needed action and discussion on LGBTI inclusion to ensure it was on the agenda across Australia.

"Standing here today in Sydney, couldn’t be more different to my life as a manager of an industrial workplace, literally across the country in WA at Alcoa’s Pinjarra Alumina Refinery," Mark said.

"But despite these differences, we share the same aims and values of equality and inclusion. The message is far reaching and well understood."

Up against a high calibre of nominations, Mark stood out to the judges for the complexity in bringing about culture change in the mining industry.

"My wish is for every employee to bring their ‘whole selves’ to work and to feel included and valued for who they are and for the diversity of ideas and experiences they bring." Mark said.

"This is a significant trophy of recognition for our efforts at Alcoa where each day we all strive a little more to create a culture of inclusion, diversity and equality," he said.

Mark said he had an epiphany late in his career which set him on the path to champion Alcoa’s journey to accept diversity, encourage open discussion on once taboo subjects, and strive to set an example of LGBTI inclusion for its business peers.

"I’m truly humbled by the many stories I’ve heard of the difference that putting LGBTI inclusion on the agenda has made to Alcoa’s employees, their families and friends."

The Australian LGBTI Inclusion Awards use the Australian Workplace Equality Index (AWEI), a national benchmark on LGBTI workplace inclusion, to measure progress. Alcoa was also acknowledged at the awards, for the fifth consecutive year, as a Bronze Tier Employer in the AWEI.