Community Landcare Initiative Continues to Thrive in its 20th Year 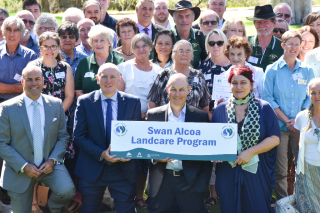 The community groups will deliver 53 environmental protection projects in the Swan Canning catchment. Local volunteers were recognised for their extensive contributions to projects ranging from weed and feral animal control, restoration of natural areas of bushland, water quality and rehabilitation of threatened species at a ceremony held in Kings Park on Thursday 22 February.

SALP was established to provide community groups with a simple process to access funding and is a joint initiative of Alcoa of Australia, the Department of Biodiversity, Conservation and Attractions (DBCA) and Perth NRM. Since its inception in 1998, SALP has provided more than $8 million in funding to community groups, with volunteers contributing 180,000 hours of their time to deliver over 1300 catchment restoration projects.

“20 years of partnership is a truly significant milestone,” Michael Parker, Managing Director of Alcoa of Australia exclaims. SALP’s longevity has been underpinned by passionate people with a vision and a mindset of resourcefulness,” he said.

SALP’s successes were recently acknowledged with a series of awards. The program collected the 2017 WA Landcare Award and a certificate of merit at the Department of Mines, Industry Regulation and Safety (DMIRS) Awards for Excellence.

“We are very proud of our staff and that SALP was one of the finalists in the Community Partnership Awards category” says Perth NRM Chairperson, Mariyon Slany.

“It shows the strong position of Perth NRM in community landcare and celebrates an enduring environmental partnership with Alcoa of Australia and the Department of Biodiversity, Conservation and Attractions.”

The challenge moving forward in this environmental space is to ensure new generations of volunteers are encouraged to continue the valuable work. At this morning’s funding ceremony event Michael Parker announced additional investments from Alcoa as part of the 20th anniversary celebrations in 2018.

“$20,000 of community events funding, made up of $1000 grants, will encourage groups to host local celebration events to help attract the next generation of volunteers,” he explained.

“It’s a legacy which I am extremely proud to be part of and one that I look forward to celebrating with SALP and the wider Western Australian community throughout this year.”

More information on the successful SALP grant recipients, their projects and the SALP program can be found on the Perth NRM website www.perthnrm.com/projects/swan-alcoa-landcare-program.