Alcoa of Australia Chairman and Managing Director Michael Parker along with a group of some 70 employees and family members took to the streets on Saturday 25 November in support of the Western Australian Pride Parade and people identifying as lesbian, gay, bisexual, transgender and intersex (LGBTI). 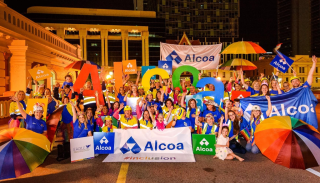 The Alcoa team were loud and proud at the WA Pride Parade in Northbridge.

Alcoa is committed to creating an inclusive workplace which fosters respect and diversity and as part of its strategy has several employee affiliation support groups including EAGLE - Employees at Alcoa for Gay, Lesbian, bisexual and transgender Equality.

Mr Parker, who marched for the first time this year, is committed to embedding equality, inclusiveness and diversity into workplace standards, behaviours and programs.

“We have strong views on a worker’s right to be their authentic self at work so they do not have to hide who they are from their co-workers,” Mr Parker said.

“I think it’s important to visibly show personally and as a company support for inclusiveness and diversity through participation in events such as the Pride Parade.

“It was an awesome night marching with a vibrant bunch of colleagues, and the crowd was fantastic too.”
Although this was Mr Parker’s first time at the event he said he was proud Alcoa had been the first resources company to walk in the Pride Parade four years ago when just eight employees marched.

“Alcoa is committed to driving change and making our workplace a model for inclusion,” he said.

“We hope by joining the Pride Parade we grow acceptance of community differences and diversity and promote Alcoa as a great, inclusive place to work.”

Alcoa was recently acknowledged, for the fourth consecutive year, as a Bronze Tier Employer in the Australian Workplace Equality Index (AWEI) – a national benchmark on LGBTI workplace inclusion, run by Pride in Diversity.