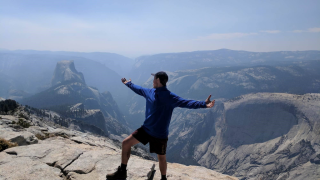 Reegan Davis on the peak of ‘Clouds Rest Mountain’ in Yosemite National Park.

Scholars reunited on Monday 4 September to share their experiences with Alcoa representatives, family members and their peers.

The students recounted their expedition highlights; observing wildlife while hiking such as black bear and five-point horned deer, being surrounded by incredible mountain scenery and waterfalls, making friends from different countries, camping underneath the stars and eating fried chicken and waffles!

Mandurah Catholic College student, Holly Snell, said she learned a lot about the environment and how climate change is a very real issue in today’s world.

“I learnt ways that we can all reduce our impact on Earth and preserve our natural bushland. I hope to make a change by sharing these strategies with my family and friends and being an example for younger kids,” Holly said.

Reegan Davis, from Waroona, said the highlight of his experience was making friends from around the globe and learning about their cultures and way of life. 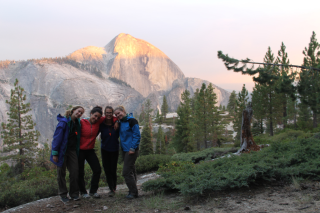 Australian scholars Emily Graham (left) and Holly Snell (right) in front of ‘Half Dome’ in Yosemite National Park with fellow scholars and new friends from Spain and Hungary.

“Those couple of weeks were the best of my life. I saw spectacular views and met some beautiful people. It was a surreal experience and I would encourage everyone to apply for the opportunity,” Reegan said.

Fifty-five scholarships were awarded globally with participants from Australia, Brazil, Canada, Hungary, Iceland, Spain and the United States. Students worked together in groups to explore the themes of climate change and biodiversity through scientific investigations in either Yosemite National Park in California or Shenandoah National Park in Virginia.

In addition to their environmental findings, the students found that despite their cultural differences, friendships can be easily formed when your core values are the same. The likeminded teens bonded over a love of the outdoors and preserving the environment.

The scholarships, which were first offered in 2014, are hosted by non-profit organisation NatureBridge. They provide hands-on environmental field science education for teens and cover the cost of airfares, visas and the full two-week program. The scholarships are awarded to young people within communities where Alcoa operates around the world.