The Swan Alcoa Landcare Program (SALP) partnership between Alcoa of Australia (Alcoa), the Department of Biodiversity, Conservation and Attractions (DBCA) and Perth NRM was recognised as the best Australian Government Partnership for Landcare at the 2017 Western Australia Landcare Awards held on Thursday night. 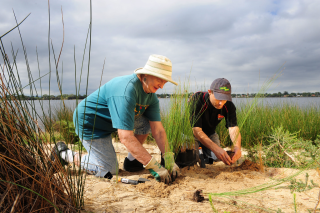 Over the past two decades, Swan Alcoa Landcare Program volunteers have planted hundreds of thousands of seedlings along local waterways.

Now in its 19th year, SALP was celebrated as an outstanding example of industry, government and community working together to improve local environments along Perth’s iconic river system.

Since SALP’s inception in 1998, urban community groups have been provided with a simple process to access funding for a wide range of landcare activities throughout the Swan and Canning catchments.

During this time, Alcoa and DBCA have provided more than $7 million to fund some 1,300 on-ground projects, with volunteers contributing nearly 176,000 hours of their time to plant almost 2.4 million seedlings which have revegetated more than 1,900 hectares of land.

“The Swan Alcoa Landcare Program partnership aligns with Alcoa’s core values of caring for people and protecting the environment, and its success is testament to the passion, vision and endless hours of hard work from local community groups and volunteers,” he said.

Perth NRM have administered the program since its inception and have played a pivotal role in working with community groups to apply for environmental grants of up to $20,000 annually as well as develop and implement projects.

“Next time you enjoy a stroll around your local lake, river or bushland or stop to admire the native plants and wildlife — know it’s more than likely SALP volunteers have played a hand in some way over the past 19 years,” Mr Parker said.