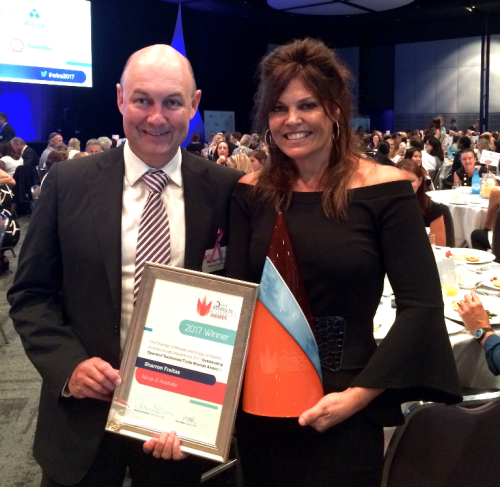 The prestigious Women in Resources Awards recognise individual excellence and outstanding contributions to the State’s resources sector and serve to promote positive role models to young women considering a career in the industry.

“What a thrill, I never thought that in five years I could go from rookie to role model,” Sharron said.

“I’m genuinely grateful for the opportunities my managers and colleagues have given me at Alcoa where many good people work. This award is for all them too, and my family whose support I couldn’t have done this without.”

When asked what was the key to her success Sharron said it was a strong work ethic, flexibility, giving and earning respect and contributing to a happy and safe workplace.

“Early on in my career I thought the barriers to my success were going to occur due to the lack of gender diversity at work but this just wasn’t a factor, it’s the technical side of things keeping me on my toes,” said Sharron.

“I hope my story is inspirational to young women considering their employment options, as this industry, and Alcoa especially, is so supportive of women.”

“Sharron’s achievements are a fantastic example of what a supportive, inclusive work environment enables; she is a very deserving, and obviously popular, winner,” Michael said.

“As a business we stand the best chance of attracting and retaining the best people, like Sharron, by providing an environment where diversity of gender and thought is encouraged. This remains central to our talent management and recruitment strategies.”

Throughout her life Sharron has been fascinated to try new things and after raising three children, owning a small business, undertaking university studies and representing WA in touch football, was excited when back in 2011 her next chapter was working in the impressive resources sector.

Sharron had no prior industry experience except by association as her partner has been a fly-in fly-out underground miner for 24 years.

After entering the industry five years ago through a traineeship at Pinjarra alumina refinery, Sharron has quickly shown the key to success is having the determination to learn new things and the drive to overcome obstacles.

Sharron obtained her Certificate III in Process Plant Operations in 2012, four months ahead of schedule, and then secured a full-time operator role at the refinery’s bauxite mills where she worked with industrial grinders, crushers and conveyors used to grind and transport the ore.

Motivated to succeed, within six months of becoming a full-time operator Sharron was appointed the refinery’s first female mills control attendant. Over the next few years and with the aim of developing her leadership skills, she pursued a range of secondment opportunities with the most recent as Operations Centre Group Leader which sees her manage 21 people across five work crews.


About Alcoa
Alcoa (NYSE: AA) is a global industry leader in bauxite, alumina and aluminum products, with a strong portfolio of value-added cast and rolled products and substantial energy assets. Alcoa is built on a foundation of strong values and operating excellence dating back nearly 130 years to the world-changing discovery that made aluminum an affordable and vital part of modern life. Since inventing the aluminum industry, and throughout our history, our talented Alcoans have followed on with breakthrough innovations and best practices that have led to efficiency, safety, sustainability and stronger communities wherever we operate. Visit us online on www.alcoa.com, follow @Alcoa on Twitter and on Facebook at www.facebook.com/Alcoa.