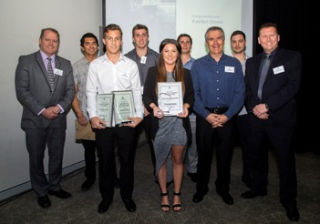 The Apprentice of the Year is selected based on a range of criteria including safety and work ethics, workplace achievements and feedback from qualified tradespeople.

In announcing the awards the Vice President of Mining Operations Mal Briggs noted the difficulty in deciding a winner for 2015.

“This year it was extremely difficult to select only one apprentice of the year as the results for all selection criteria were close,” he said.

Highlighting the importance of relationships, Mr Cransberg said, “Make the effort to meet different people; even shake the hands of the CEO you’ve never met.”

Jonathon Tarnowy was named the Wagerup Apprentice of the Year and Nick Banasiak took out the refinery’s Safety Award.

Mining apprentice Jack Rutherford was honoured to receive both Apprentice of the Year and The Mining Safety Award.

The company received approximately 600 applications for the 24 positions available in 2016, with the successful applicants due to be announced later this year.

Alcoa has proudly offered apprenticeships since operations began more than 50 years ago, giving thousands of young people on-the-job training in an exciting and complex work environment.

Since the program’s inception in 1963, more than 1550 apprentices have received training at Alcoa’s operations in Western Australia. This represents an investment of more than $140 million, which directly contributes to building skills in local communities, in which many of Alcoa employees and their families live.

Alcoa’s widely-renowned apprenticeship program typically draws its candidates from communities surrounding its operations, including the Peel and South West regions, to support the delivery of training and development opportunities for young people in the area.

About Alcoa
A global leader in lightweight metals technology, engineering and manufacturing, Alcoa innovates multi-material solutions that advance our world. Our technologies enhance transportation, from automotive and commercial transport to air and space travel, and improve industrial and consumer electronics products. We enable smart buildings, sustainable food and beverage packaging, high-performance defense vehicles across air, land and sea, deeper oil and gas drilling and more efficient power generation. We pioneered the aluminum industry over 125 years ago, and today, our approximately 59,000 people in 30 countries deliver value-add products made of titanium, nickel and aluminum, and produce best-in-class bauxite, alumina and primary aluminum products.