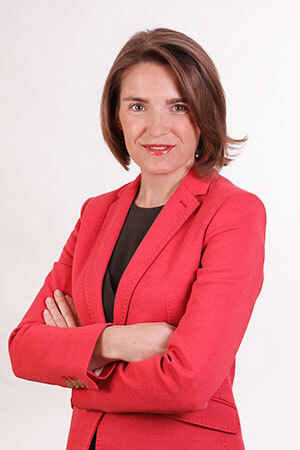 Rosa M. García Piñeiro is Alcoa Sustainability Vice-president and President of Alcoa Foundation since November 2016. Previously, she served as Global Director of Sustainability since September 2015.

In 2005 Rosa moved into a European position as Director Environment, Health and Safety (EHS) for the Primary Products business, where she stayed for three years, taking in 2008 the responsibility for EHS and Sustainability for the region.

Rosa expanded her role in 2012, when she was appointed Director of Government Affairs in addition to her role in Sustainability. In her new function she had responsibility for coordinating and overseeing government interactions in the different countries where Alcoa has interests across Europe.

In March 2014 Rosa was named President of Alcoa Spain, where her main target was to obtain an energy framework favorable for the energy intensive industry at national level.

Rosa serves in the Board of Directors of the Alcoa Foundation since 2012 and in the Advisory Board of the School of Mining Engineers of Madrid since 2014. From March 2014 to September 2015 Rosa was President of the Board of Alcoa Inversiones España, the holding group financing Alcoa operations in Europe, Middle East and Brazil. In 2003 she was named “Woman Worth Watching” by the Diversity journal.

She is passionate of Diversity and Education and supports different organizations in coaching and teaching programs.